Free in Hijab: Breaking the Stereotype About the Islamic Veil

Women’s freedom to dress has been upheld by today’s society. But, when it comes to Muslim women choosing to wear Hijab, the standards seem to differ.

I happened to see a little commotion, a year or so ago, regarding a Twitter video posted by Elite Netflix captioned Queen, showing a young woman walking into a club with a confident smirk garnering the attention around her. Though the clip seemed quite usual for an English show, it was the tweets that explained the reason behind the commotion.

Apparently, the young woman in the clip was a Muslim woman and members of the Twitterati were fed up with the customary showcasing of Muslim women ‘getting rid of’ their Hijab in the blink of an eye.

Since expecting people from the entertainment industry to understand the concept of modesty and religion would be an absurdity from my side, I let pass the tweet.

However, having to write this article, a little research on the internet helped me find out that the clip belonged to a series titled Elite and the woman was a character in it by the name Nadia Shanaa. Nadia of Palestinian origin was forced to remove her Hijab on her first day at a reputed school in Spain. Although she maintains her Hijab outside school, afterwards it is shown that she voluntarily removes her Hijab.

If someone found the plot of the series disturbing, then let it be warned that such stereotypical attitude towards Islamic clothing and practices is not confined to the world of entertainment, but are very much prevalent all around us.

In today’s age of feminism, unpopular opinions and TED Talks, it is a shame that women are still made to feel answerable for their choice of clothing.

Well, let me make it clear that it is not the clothing of those women who choose to wear tube tops, off shoulders and cold shoulders I am referring to, because their rights have been hailed and upheld by today’s society, or that is what it seems like from the abundant number of YouTube videos and social media articles floating around.

On the contrary, it is the clothing of those Muslim women I am talking about, who choose to cover themselves, prioritize their style of dressing according to their religious teachings, and who are still bombarded with questions every time they step out in their hijab or purdah.

However, such questions are exclusively reserved for Muslim women only. You would never have heard of Christian nuns being asked, Why do you always dress in church attire? Is it not suffocating to wear such clothes in this much heat? How unlucky are you that you cannot wear anything else outside! Is it not enough to be a believer in God and religion by spirit and mind? Why is it so necessary to dress up in this fashion? etc. The same is the case with the women of other faiths too.

Hence, it is us who need to be equipped with satisfactory answers to all such ‘sympathizing’ questions and remarks from our neighbours, classmates, teachers, and sometimes even friends.

I remember reading an article about how feminism is misunderstood these days. The article mentioned the story of a woman who decided to prioritize her family over her career after having a baby and was called out for it. The key issue highlighted in that article was that feminism is all about respecting choices and not imposing feminist-certified practices upon women.

But, how often is the hijab worn by a Muslim woman considered as a choice rather than a compulsion? Has it not become a norm to view purdah or veil as regressive, backward and as a symbol of oppression upon Muslim women?

As an avid viewer of historical shows, I have always wondered when the likes of Draupadi, Sita, Jaivanta Bai, Kunti and many others during those times covered their heads, how then does the concept of hijab solely belong to Islam. Maryamas the mother of Jesusas, and similar figures of Christianity are also always seen in their headscarves. Then, how and when did covering oneself become a symbol of shame and derogation, when all these dignified women made their mark in history without having to let go of their faith and practice?

Today, Islam is often misrepresented as an ideology undermining the status of women while the fact is that Islam upholds their dignity. The Holy Quran sets forth the example of the wife of Pharaoh and Maryamas for all believers; men and women[1]. The former for her passionate striving to be free from sin, and the latter for her modesty. This further reinstates that Islam does not confine the concept of modesty to women.

But again, the interests of people lie only in the verse where wives are referred to as tilth, i.e. the tilth in which the seed of progeny is sown, and their own misinterpretations of the use of such a term.

The prejudice against Islam and its practices have become highly widespread today, and this prejudice has seeped so deep into the minds of the people that not even Muslim women dressing the way they choose to in their day to day lives, causing absolutely no inconvenience to others, are spared.

The very same activists who call out people for their double standards on issues pertaining to women do not hesitate even once before assuming a woman dressed in an abaya to be leading a life of oppression and misery. One look at a woman clad in purdah and lo! all slogans of ‘a woman isn’t what she wears’ are forgotten and discarded.

Usually, when someone remarks about the dress worn by women to be short, it is deemed as heroic to reply aap ki soch se to badi hi hai meaning my dress is not as short as your mindset is narrow. However, it seems that this mindset needs to be broadened only if the dress worn is short. The very same mindset can be conveniently narrowed if the dress worn is long.

The author is an ACCA affiliate and is currently pursuing her undergraduate degree in Commerce.

Subhanallah!!! This is so true and heartbreaking.
May Allah cleanse our world of prejudice and hypocrisy. Insha Allah.

This is such a beautiful article…. Ma shaa allah ❤️

Thooba… You should be so proud of yourself!

Masha allah .so inspiring to read .every muslim women should hold their head high

THOOBA, I am proud of you.
MA SHAA ALLAH,

How can a Merciful God demand the slaughter of a child? How can a pious father kill his son? How come this is not a sanguinary tradition? There are many myths related to Eid-ul-Adha, all but emanating from ignorance about Islamic ideologies. #Eiduladha 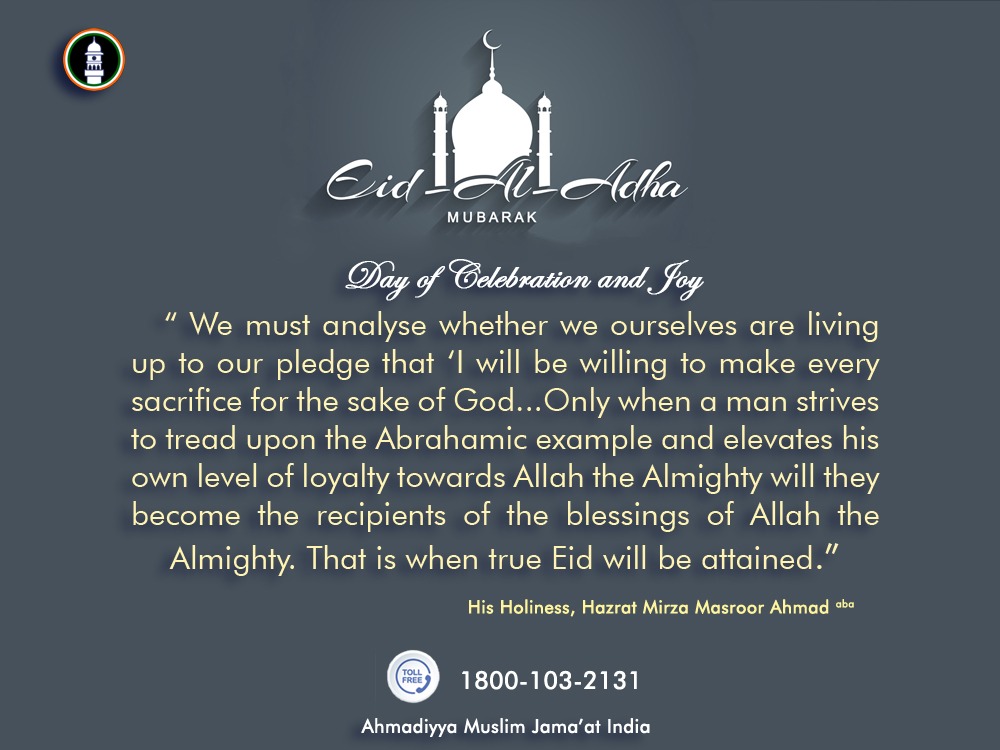 RT @alislam: #EidAlAdha is an occasion on which Muslims everywhere are encouraged to make every kind of sacrifice for the spiritual, moral,…