The 132 years long history of the Ahmadiyya Muslim Community testifies to the fact that this community has been working to establish peace and unanimity between people of all faiths.

The 132 years long history of the Ahmadiyya Muslim Community testifies to the fact that this community has been working to establish peace and unanimity between people of all faiths.

Though man’s tendency to disagree is what, in a sense, is paving the way for human development, there is no denying the fact that dissension has claimed millions of lives throughout human history and has inflicted great harm to man.

This is the reason that while the Holy Prophetsa considered the disagreement of his sincere followers to be a source of blessing, he also warned his people of the ill-effects of this human tendency, especially when it is driven by selfish motives instead of sincere consideration for truth. The Holy Prophetsa had prophesied about a great dissension that was bound to occur among his people in the latter days owing to the selfish behaviour of the Muslims at that time. He said:

Surely things will happen to my people as happened earlier to Israelites, they will resemble each other like one shoe in a pair resembles the other to the extent that if anyone among the Israelites has openly committed adultery to his mother there will be some who will do this in my Ummah as well. Verily, the Israelites were divided into 72 sections but my people will be divided into 73 sections, all of them will be in the fire except one.[1]

Further detailing the moral state of the Muslims in those days, the Holy Prophetsa said:

While these prophecies with all the details are confirmed by the current state of the Muslims, we may find ourselves happy for the reason that the words of the Holy Prophetsa have been fulfilled to its letter, attesting to his truthfulness. However, the fact cannot be ignored that Muslims, who were entrusted with the responsibility of uniting the entire mankind, are themselves divided into different sects and are disputing with one another over trivial matters.

One here may err and haste in blaming God for putting Muslims in this unfortunate situation, where their internal disputes have acquired such an ugly shape that no sign of unity can be seen to exist in them; let alone establishing unanimity among all the people in the world.

However, it should be remembered that the discord we see today in the Muslim world, is only the result of Muslims deviating from the right path and ignoring the true teachings of Islam. Otherwise, the act of disagreeing, as already explained, is vital for man to progress in life. Hence, God’s providing man with this essential faculty cannot be made a point of objection against Him for any reason.

The only possibility for any allegation to be raised against God in this regard would be if He had not proposed a way out of this abyss and had not facilitated the establishment of unity among His ardent believers.

Here, one may perhaps question the need for Divine intervention in reuniting a society that has fragmented into factions and think why humans themselves cannot carry out this task. When we study the history of religions, we find that circumstances that sow dissension among religious people get graver with time and give way to extreme discord as they get farther away from the time of their prophets. In such a situation, human efforts to reunite those people are bound to go in vain unless God Himself devises a scheme to bring them together.

Hence, it has always been the way of God that He Himself undertakes the task of uniting people whenever there occurs conflict between them. Now the question is what plan has God devised for uniting Muslims and what method has He adopted that would serve to eliminate the various disagreements which have been established among them.

The Holy Founder of the Ahmadiyya Muslim Community, Hazrat Mirza Ghulam Ahmadas, claimed to be that Promised Messiah and Mahdi and founded the community exactly 132 years ago, on 23 March 1889, in order to attain the aforementioned objective of uniting mankind under the flag of unanimity.

Here, a question may arise as to how the founding of yet another community can be considered as a step towards unity if the only purpose it serves is to add one more sect to an already long list of factions and schisms. Moreover, the only unity that appears to have formed as a result of the emergence of this new community is that all other sects and factions became united against it.

It should be remembered that whenever a prophet appears among a people, its different groups, who before the advent of that prophet, were in a state of extreme dispute and dissension, suddenly come together and unite in opposition to him. However, at closer observation, it becomes clear that their unity is not a unity in the true sense, but only appears to be so, as the Holy Quran rightly points out:

Thou thinkest them to be united, but their hearts are divided.[3]

It is this same forged unity that appears to have formed against the founder of the Ahmadiyya Muslim Community and his adherents when they undertook the mission of uniting people and establishing peace. However, it is not just this superficial unity that is created at the hands of such a prophet, but the advent of a Divinely guided reformer also fulfils the task of truly establishing peace among people.[4]

With respect to the Ahmadiyya Muslim Community, this true aspect of unity can be seen in its unique origin, the kind of which can only be witnessed in the cases of Divine religions. While the different Muslim sects we see now are mostly the outcome of splits that occurred within previous sects caused by disputes or as a result of disagreements in different matters, the Ahmadiyya Muslim Community was initiated through an announcement made by its founder, which he did following Divine command. He invited Muslims from all sections to unite under him, voluntarily, pledging to lead a virtuous life and devote themselves for the cause of humanity, thereby forming a community of righteous people.

Hence, founding this community was not just an addition to the list of many sects that already existed in Islam. In fact, this was not at all the intention or the achieved benefit from the birth of this community. Instead, this is a community that was established under the command of God Almighty with the sublime goal of reviving Islam, uniting Muslims and reforming mankind.

Since its establishment, the community has been attracting hundreds of thousands of people belonging to diverse ideologies from across the globe. To date, tens of millions of people have joined this blessed movement, who are spreading the true and peaceful teachings of Islam all over the world under the guidance of a worldwide spiritual leader, who is considered as the Caliph of Islam in this age by Ahmadi Muslims.

The 132 years long history of the community bears testimony to the fact that this community has been working for not only uniting Muslims under the banner of Islam but also the people of all faiths under the flag of humanity.

[4] This deep and insightful observation was made by the Fourth Caliph of the Ahmadiyya Muslim Community, Hazrat Mirza Tahir Ahmadrh, more eloquently and beautifully in his book, With Love to the Muslims of the World, pp. 5-6. 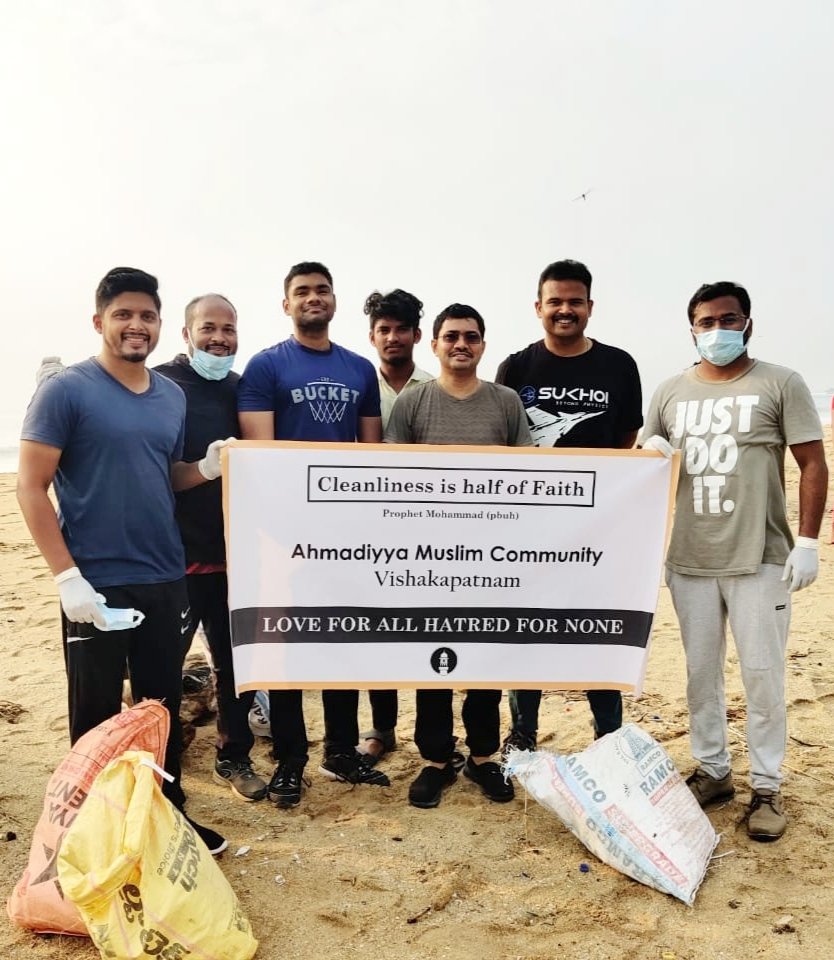 "The best way to find yourself is to lose yourself in the service of others." - Mahatma Gandhi Ji #MahatmaGandhi #GandhiJayanti

The Promised Messiah (as) said: "Abide by the truth and hold fast to it. He sees what is in your hearts. Can man ever deceive Him? Can trickery be of any avail against Him?" (8/n) #KnowTheMessiah https://t.co/GV3EANB17p 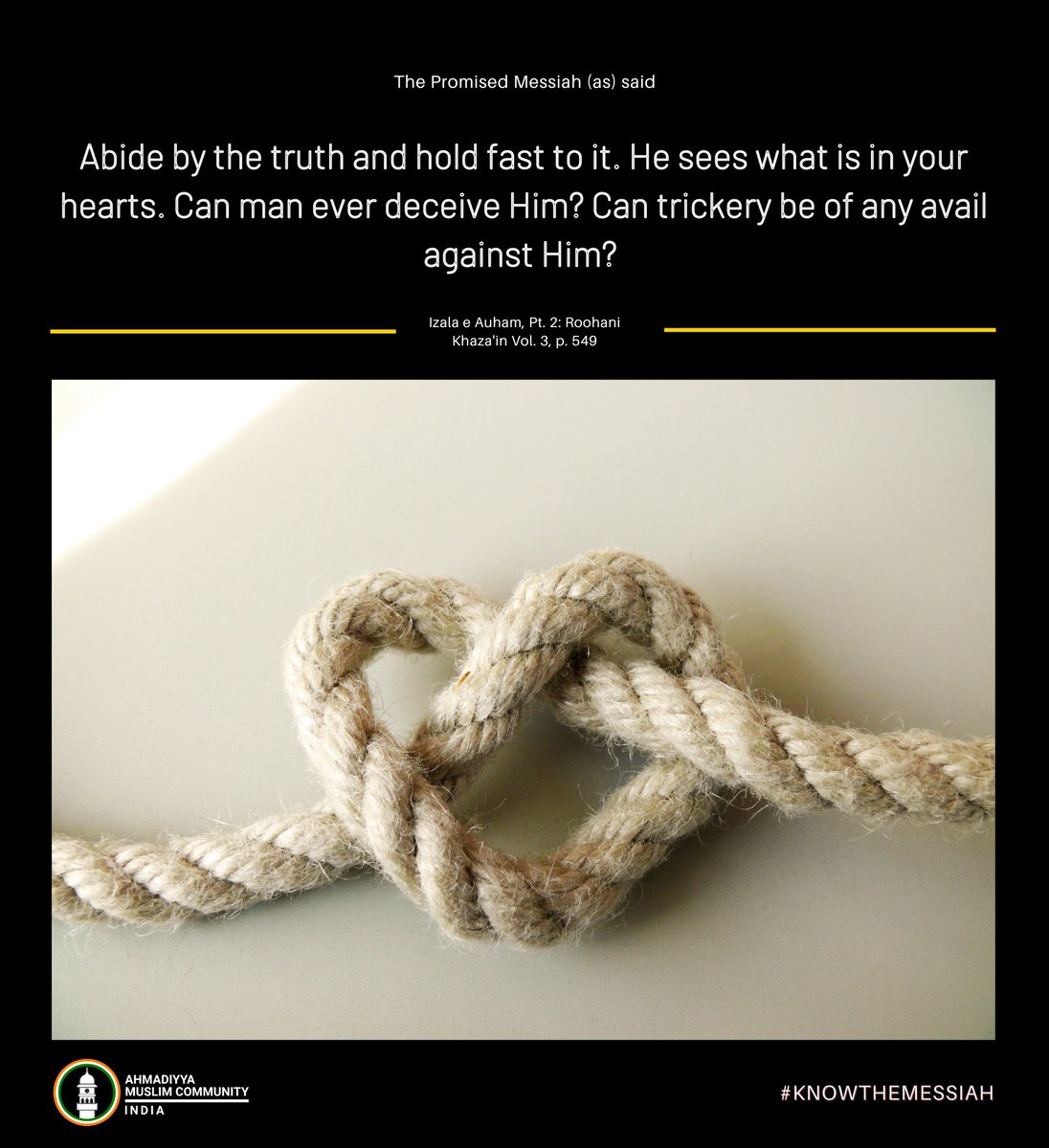