Ahmadiyya Caliph explains how water stress is driving terrorism and draws the attention of world leaders towards curbing the issue.

In his keynote speech delivered at the 15th National Peace Symposium organised by the Ahmadiyya Muslim Community UK on 17th March 2018, the Worldwide Head of the Ahmadiyya Muslim Community, His Holiness Hazrat Mirza Masroor Ahmadaba addressed an audience of over 900 people representing 31 countries among whom were government ministers, ambassadors of state, members of parliament and other dignitaries.

In the speech, His Holiness rightly pointed out the fact that climate change is largely acknowledged as the most pressing issue of the time by many politicians and intellectuals. However, he drew their attention to the fact that there exist many other issues which require the same attention as climate change and demand urgent heed, one of them being the poor living conditions of the people living in the poorest nations largely owing to their lack of access to clean water. His Holiness observed how they are trapped in this devastating situation and how this makes them susceptible to recruitment by terrorist organizations. We here present His Holiness’s observation in his own words.

In today’s world, we often see the major powers and the international institutions make schemes or plans that are aimed at bettering the lives of people around the world. In recent times, one of the issues that many politicians and intellectuals have debated and campaigned about, is climate change and specifically a reduction in carbon emissions. Certainly, striving to protect the environment and to look after our planet is an extremely precious and noble cause. Yet, at the same time, the developed world, and especially the world’s leaders, should also realise that there are other issues that must be tackled with the same urgency.

People living in the world’s poorest nations do not concern themselves with the environment, or the latest figures on carbon emissions; rather, they wake up each day wondering if they will be able to feed their children. Their economic plight is truly desperate and their poverty levels are far beyond our comprehension. For example, there are numerous countries where the majority of citizens do not have access to clean drinking water and are forced to survive by using dirty pond-water to fulfil their basic needs. Even that too is not easily available; rather, women and children have to travel each day, for miles on end, to collect water for their families, which they carry home in big vessels, balanced on their heads.

We must not consider such hardship as other people’s problems. Instead, we must realise that the result of such poverty has severe implications for the wider-world and directly affects global peace and security. The fact that children have no option, but to spend their days collecting water for their families, means that they are unable to go to school, or to attain any form of education. They are stuck in a vicious cycle of illiteracy and poverty that is seemingly endless and hugely damaging to society. Today, their poverty and hardship is compounded by modern technology, through which, even people living in war-torn or deprived parts of the world, are able to see the comfort with which people in developed countries are living and the opportunities that exist for them. Witnessing the great disparity in their circumstances, compared to others, is cultivating further agitation amongst the local people and these frustrations are being preyed upon by extremists, who entice the impoverished with financial reward and by promising a better life for their families. Similarly, the targeting of illiterate youth means that the extremists have free rein to radicalise and brainwash them. The extremists take advantage of the fact that the rulers of those countries have, more often than not, failed their people.

Most regrettably, the ruling classes, in war-torn or deprived nations, are more often concerned about preserving their own status and power, than helping alleviate the suffering of their people. The result is that those who have nothing, come to view their own corrupt leaders with contempt and see the world’s major powers as the enemy. Tragically, we are seeing the horrific effects of this in Muslim countries as well, and it is after observing the desperate state of their countries of origin, that some Muslims brought up in the developed world have been radicalised and have perpetrated horrendous terrorist attacks here in the West.

Hence, I firmly believe that if we truly wish to protect our world and to ensure we leave behind a legacy of opportunity for those who follow us, it is essential that every effort is made to raise the standards of the developing world. Poor nations must not be looked down upon, rather we should consider them as part of our family – our brothers and sisters. By helping the developing nations stand on their own feet, and by giving their people opportunities and hope, we will actually be helping ourselves and safeguarding the future of the world. Otherwise, we are already seeing that the poverty and destitution in the developing world is negatively affecting the rest of the world as well.

What Is Causing Spikes in Divorces and Marital Issues?

RT @NewsMTA: “God-willing, the day will come when the Muslim Ummah, under the flag of the Promised Messiah (as), will enter the Holy Ka’bah… 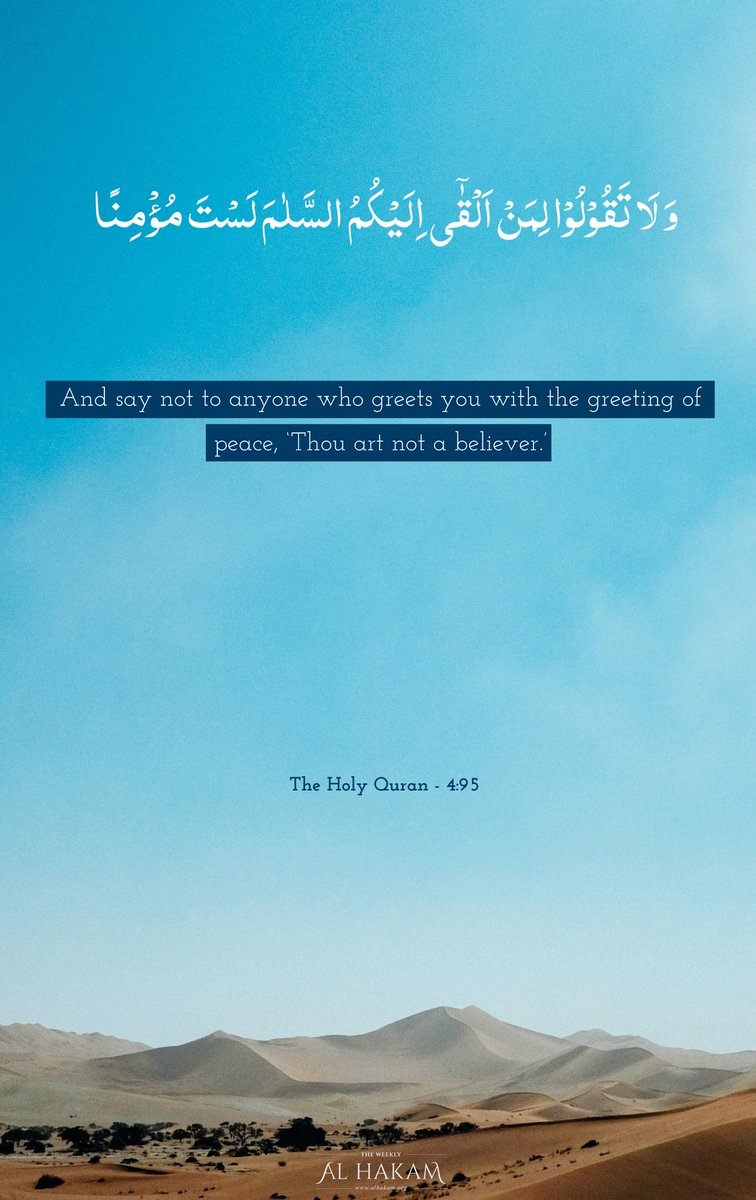 RT @ReviewReligions: We are pleased to announce the speaker list and topics for the upcoming #GodSummit. Streaming exclusively on The Revi…